The European Championship is in full swing and the Dutch team was reaching for the stars! The whole country was excited about the first 3 matches. We won’t mention that dreaded last game for obvious reasons… Football, or soccer is in the hearts of many Dutch people, and the orange flags and many sales campaigns bear witness to this. The European Football Championship is extremely popular! This sport is in the hearts of many Dutch people. We’ve been working with various companies involved in football for years, so we enjoy this time a lot.

Football books are popular – not just in the Netherlands, but all over the world. This makes it attractive for a publisher to release books about the game, famous players, coaches, and clubs in various languages. Textcase has translated many books on football-related subjects into all major languages spoken around the world.

Our team of translators is currently working on a book about RSC Anderlecht. Keep an eye on your local bookshop! 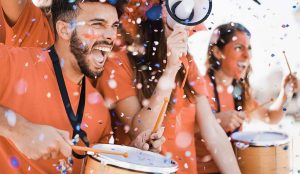 Football events are always popular. The European Championship generates extra hype, but football has always been one of the most popular sports in the Netherlands. People from all generations love to be involved with this national sport and everything that comes with it.

Soccer Camps United organises football camps for young people. This super fun initiative realises the dreams of young football fans and is a collaboration between top clubs and the business world. With many thousands of participants each year, this is a major recurring football event.

Textcase makes sure that the website of Soccer Camps United is always perfectly translated, so that everyone can enjoy these football camps. We translate the website into English, French, German and Spanish.

If there’s anything that connects us both at home and abroad, it’s the European Championship. People from many countries come together to cheer on their national team. This is why Textcase loves international football. Country borders are not as important anymore, and football is what connects everyone. With all the translation work we do for the football sector, we follow every match closely. For us, football and translations really go hand in hand.

What’s your favourite team? Are you supporting your own country or some other?