Do bilingual people have a different perspective on the world? 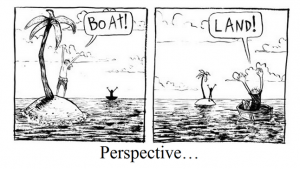 Recent research by the university of Lancaster shows that bilingual people have a different view on the world than people who only speak one language (monolinguals).

It is already known that bilinguals have all kinds of benefits, such as a cognitive boost, less chance of dementia (because of a larger white matter integrity in the brain) and a more flexible brain (as bilinguals switch between languages).

According to the mentioned study, German-English bilinguals seem to analyze and process information differently than monolinguals. Researchers showed a video of a woman walking to her car to their test subjects. English subjects described the ‘’plot’’ as “a woman walking”, German subjects would describe it as “a woman getting” (walking) to her car.

The bilingual German-English subjects described both the action as well as the goal from the video; “the woman is walking to her car”. This shows that analyzing, processing and responding in multiple languages also affects their perspective on the world. This means that if someone is bilingual and familiar with multiple different cultures, you see the world differently compared to someone who only speaks one language and is familiar with only his or her own culture.

Whether or not someone is bilingual, is subject to debate and depends on the level of how well a person has a grasp on the language. You can take French classes but that doesn’t mean you will be just as good as someone who grew up speaking French. Writing technical or juristic texts will still remain difficult.

The two most prominent ways for being a ‘’real’’ bilingual and having all the cognitive advantages are growing up with parents who speak different languages and teach the child both languages, which stimulates the brain at a young age. The second way is living in a different country where the language and culture is different. Being in a different environment where you are forced to learn and use the new language to survive provides a stimulus.

Bilingual translators are usually the best persons for translations. This way, the desired effect or goal of the original document is translated to its intent. Textcase is proud to have a large amount of bilinguals in its network. Also, many of our translators have lived, or still live, in a different country than the one they grew up in. We, almost exclusively, employ native speakers for our translations.